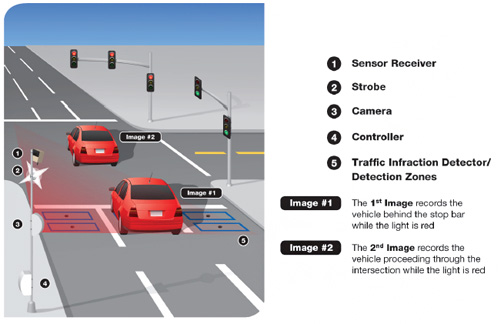 Travel Safely in Our Community

The system activates when motion is detected just prior to the stop bar after the traffic signal has turned red. The cameras capture two images of an alleged violation, taken from the rear of the vehicle.

Data, including the time, date and duration of the yellow and red lights, also is recorded. Cameras also record a 12-second digital video of the violation, including six seconds prior to and six seconds after running the red light.

An assessment conducted by ATS shows that red-light running is a problem at many intersections throughout the City of Milton. The National Highway Traffic Safety Administration estimates 20 percent of all drivers do not obey intersection traffic signals. Red-light cameras help the City of Milton Police Department enforce traffic laws by automatically photographing vehicles whose drivers run red lights. The City of Milton is committed to the safety of the community and dedicated to reducing red-light violations and their potential for crashes and injuries on our roadways.

Run a Red Light - Save Only Seconds

Red-light violations contribute substantially to the millions of intersection collisions that occur nationally each year. Red-light running is the leading cause of urban crashes according to the Insurance Institute for Highway Safety. In 2007, almost 900 people were killed and an estimated 153,000 were injured in crashes that involved red-light running.

Police Can't Be at an Intersection 24/7

The City of Milton's Police Department simply does not have enough police officers to enforce red-light running violations at every dangerous intersection in the city using conventional methods.

The purpose of this program is to increase traffic safety in the City of Milton by reducing red-light violations. The overall goal of the program is to change dangerous driver behavior. Each driver makes a decision when approaching an intersection where the light has just turned red. Impatient drivers often choose to continue through the intersection, ignoring the law and putting lives at risk.

An analysis by the Insurance Institute for Highway Safety shows red-light cameras saved 159 lives between 2004 and 2008 in 14 of the biggest US cities. Had cameras been operating during that period in all large cities, a total of 815 deaths would have been prevented. The Federal Highway Administration studies show a 40 to 50% reduction in red-light running.